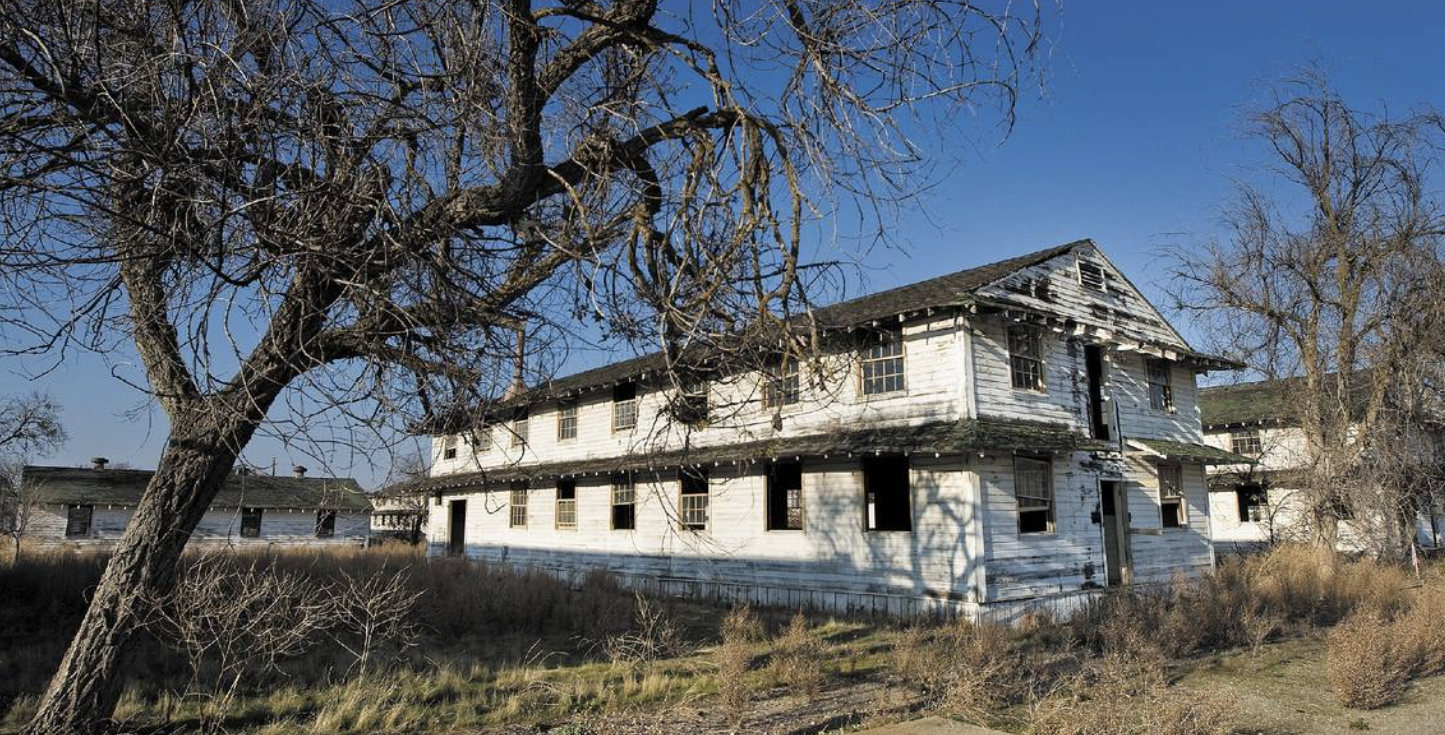 Scraggly oak trees frame an abandoned barracks building, among those that will be soon torn down. Photo: Joe Johnston

Brig. Gen. Keith Jones gazed through the worn windows on row after row of battered and broken World War II-era barracks left standing at Camp Roberts and recalled their better days. “You were glad to have a roof over your head and shade from the sun,” he said. For years, motorists on Highway 101 have seen the jarringly empty ghost town on the camp’s west side and wondered what the buildings were and why they’re still around.

Decades ago, the post was alive with 50,000 incoming soldiers preparing for war. But this summer, 658 of those old buildings will be torn down in a three-year process to finally clear the camp just north of San Miguel of structures that have not been used in more than 30 years. The $20 million project will go ahead after the California National Guard, which runs the camp, found a way to demolish the barracks and other structures while reducing costs associated with storing the old boards, beams and rafters permeated with hazardous lead paint. Its solution: build its own hazardous waste landfill. Under construction since 2009, it’s expected to be ready in March.

If the buildings were to collapse, they could compromise the soil should the camp get the opportunity to build new structures. About 160 acres will go back to native landscape. But even though the buildings will soon be gone, the memory of what once was will live on. “There’s a lot of history,” Jones said. “An old facility like this touched a lot of souls.”Wartime construction The buildings at Camp Roberts housed America’s soldiers after the boom of wartime construction that started in 1940 and finished in 1941. The units were built hastily — bringing thousands of jobs to the area — and followed the standard construction style as other posts took shape across the country.

A total of 741 buildings went up at Camp Roberts. They were simple buildings built to last five years — but some remained in use until the late 1970s and early 1980s. The Army turned some buildings of this type into a museum at Fort Leonard Wood in Missouri to meet historical preservation requirements so their replicas across the country could be taken down. Although plain, the buildings represented better craftsmanship than modern buildings, some say. “There were no nail guns back in those days,” Jones said, pointing to rows of nails visible along the wood siding and pointing to the perfect symmetry. “I used to look at these when I was a private.”Jones arrived at Camp Roberts in 1971, when the National Guard took over the 42,000-acre camp. “The craftsmanship required what an extraordinary workforce,” he added. Each of the hundreds of two-story barracks buildings housed 80 soldiers and were accompanied by mess halls, chapels, supply rooms and administration offices.

“They were just wooden buildings. You scrubbed the floors and dusted down the walls,” said John Harris, 80, of Bradley. He came to Camp Roberts as a colonel in 1950 when the post was reactivated for the Korean War. Harris slept away from the privates’ barracks in a different set of buildings that offered him an individual room rather than the two rows of double stacked bunks most men got. The privates’ barracks also had a ground-floor latrine with toilets and showers, all in one open room. “I don’t know why they called us privates; there was no privacy,” said Phil Dirkx, a Paso Robles resident and Tribune columnist who trained troops at Camp Roberts in 1952 and 1953 as a lieutenant. Although the barracks were basic, Dirkx said he appreciated small luxuries such as the gas furnaces. At Fort Dix in New Jersey, Dirkx recalled its messy coal furnaces.

“Smoke would blow into the barracks and we would wake up with black noses,” he said with a laugh. In general, Army barracks were used to instill discipline. “The bed had to be made just so,” Dirkx said. “You learned how to make hospital corners. They supposedly threw a dime or quarter on the bed — and it better bounce. Those blankets better be tight.” Eventually, Camp Roberts no longer had the troop population to support its original buildout. Many buildings fell into disrepair. One brigade of buildings was torn down on the camp’s east side in the 1970s while its buildings to the west were condemned. Harris remembered moving to the east side shortly after arriving at the camp.

“We ran off the jackrabbits and rattlesnakes and settled in,” he said. Buildings on the north end were demolished in the 1990s. Others were kept for today’s troops. Buildings left without care on the west side now stand wearily amidst blocks of dusty streets, barred from access. White paint peels from dark walls. Insides were gutted for usable materials. “Quite a haunting scene,” Jones said. Black-and-white photographs from the camp’s early years, show men in crisp uniforms seated on benches inside a mess hall, ready for a meal. Rows of wooden tables were draped in cloth under bright bare-bulb lights overhead. On a recent afternoon, a similar setting was transformed by the penalties of time. The few tables that remained in one mess hall stood cracked and slumped into flooring that lay in torn pieces. Tidy plaid curtains no longer hung from the windows, whose panes were missing or broken into shards. Hunks of ceiling were gone, the building’s dusty wooden rafters exposed through gaping holes.

“The problem is the government didn’t maintain those structures and couldn’t afford to,” said retired Army Reserve Col. Kerry Diminyatz, chief of facilities operations and maintenance at the California National Guard. Today, about half a dozen have caved in. The structures were initially boarded up, but moisture got trapped inside and caused more wood damage. The coverings were removed in the 1980s. Harris said he visited Camp Roberts recently and was mostly unfazed by seeing the old buildings again. “I don’t get funny feelings,” he said. “It’s just another Army camp.” Officials had originally planned to demolish 160 of the old buildings in 2005 — and reuse the wood, which was kiln dried, rather than air dried, making it more solid than most wood used in construction today.

But the original craftsmen used gasoline, the product available at the time, to thin the lead-based paint on the boards. The process drew the lead so deep into the wood, it made them unusable under today’s state lead standards. “It’s really sad because if you’re any kind of woodworker, the lumber used in these old buildings is just beautiful,” Jones said. The camp conducted a field test in 2005 where crews tried to strip the paint from the boards using a machine. They hoped that the wood could be reused and the hazardous paint chips could be combined with other materials to make electronic equipment. But Diminyatz said the test failed because it was too costly and labor intensive. And, once the lead was removed, the wood was so whittled down it became unusable. The plans were scrapped and most buildings remained. Other supplies and materials have been removed over the years for reuse. Metal ductwork was salvaged. And padded chairs and a metal wash bin have also been re-purposed from an old mess hall into a new laundry room, for example. Plans also call for the concrete foundations to be taken out for use on roads.

There’s no way to recycle the window glass because it’s encased or broken, so that will go to the landfill, too, Diminyatz said. Without the landfill, the demolition project would require about 900 truckloads of debris to be transported to the nearest commercial landfill in Kettleman City, costing taxpayers more, officials say. Storing the waste on-site reduces an approximately $50 million to $60 million project to about $20 million, Diminyatz said. The demolition, which includes the cost of the landfill, is being funded by National Guard federal maintenance dollars. The Army hadn’t made the old buildings a priority because it placed supplies and equipment for soldiers ahead of demolition spending, Diminyatz said. About $5 million has been allocated for the first phase of demolition.

The camp is also getting $12 million to further modernize the roughly 106 original barracks kept for current use, giving the camp 4,200 usable beds for troops. The post has additional housing for other purposes. In 2010, the camp housed that many troops at its peak, readying them for deployment to Iraq and Afghanistan. Other troops remain on reserve to train for natural disasters and other missions. The usable buildings received new aluminum siding in the 1980s, changing their face from the WWII-era look of white and green to a mustard color. “They are the same old buildings but with just a different skin and a different surface,” Jones said.The efforts are part of an ongoing project to bring the camp up to date. Fourteen barracks are receiving upgrades, and an additional six barracks are slated to undergo fixes in the spring. Among the changes are adding electrical outlets so soldiers can charge cellphones and laptops. The old barracks only had four electrical units, two upstairs and two downstairs to power a floor buffer.