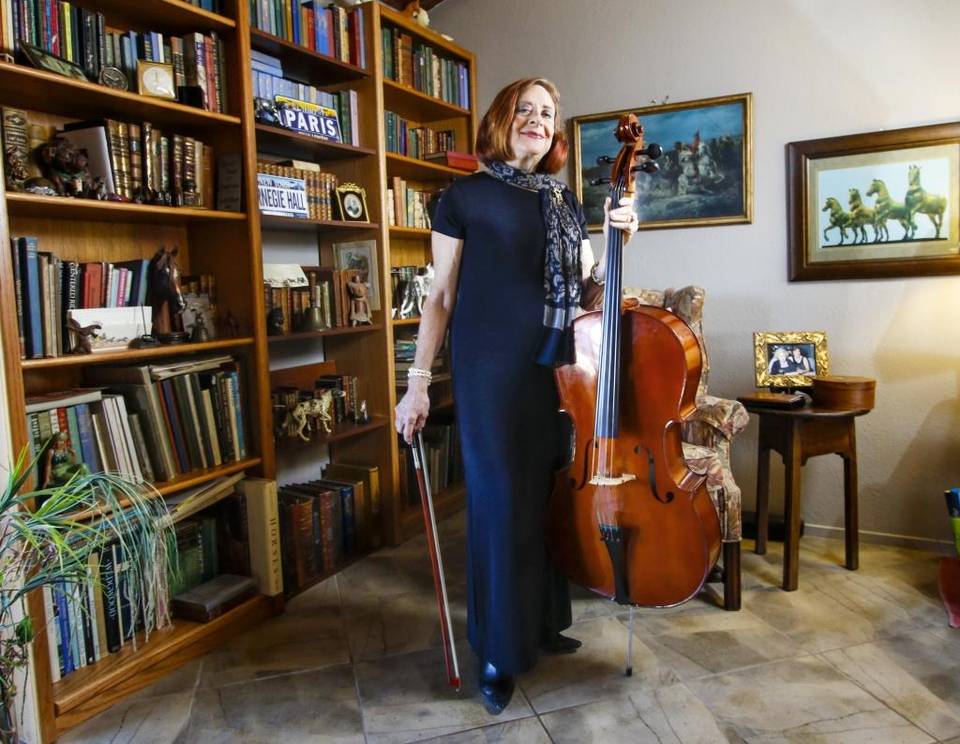 Photo by Senior Photographer Joe Johnston at The Tribune.

Sixteen years ago, when Judith Baron was 57 years old, she saw a magazine ad about horses for sale in Paso Robles, prompting her to move there on a whim after devoting three decades to an architectural and interior design career in San Francisco.

Now at age 73, Baron has taken up violin, piano and cello lessons and immersed herself in a whole new community — symphony and music. Looking back, she says it’s never too late to try something new. The sentiment follows a series of impromptu life choices Baron has made over the last seven decades based on listening to herself, following her instincts and making changes even when she was met with the unknown.

“My life has been one big unplanned experience,” Baron said with a laugh. “But it’s more about the idea that it’s not too late to experience things, regardless of age.”

Baron, born in Sioux City, Iowa, took piano lessons as a child and also explored the violin, ballet and ice skating. Practicing piano was a bore, she recalls, but when her father brought home a 1923 Chickering baby grand in solid walnut with ivory keys from an estate sale, his excitement over the prized purchase encouraged Baron to trudge on with it for a while longer.

“My father didn’t allow you to wear blue jeans with those little brass cleats on the back of your pockets because it would scratch the bench seat,” she recalled. “He loved that piano.”

But soon she would give it up, along with her other lessons, as she moved on to other things. Baron ended up earning bachelor’s and master’s degrees in psychology in addition to studying architecture during a two-year stint in France while her then-husband was stationed there with the U.S. Army. When they returned to the States, Baron took a job with the federal government doing social work to help improve the lives of impoverished youth in Dallas, Texas. But by the time she was 28, she decided she needed a change.

“I felt more and more hungry for the arts and felt the disappointment of the poverty program in that era not succeeding,” she said. “An inner voice said, ‘You’re young enough. Get out.’ So I did.” Around the same time, Baron divorced and found herself at a crossroads over what to do next. A celebration in sunny California was her answer.

“My brother was going to a wedding in L.A., and planned to make a little trip up to San Francisco,” she said. “So I went with him.” When they got there, Baron fell in love with San Francisco’s skyline of historic buildings and quaint Victorian row-homes.

“My brother was packing the car at the hotel and he turned around and he said, ‘Why aren’t you packing?’ and I said, ‘I’m not going,’ Baron recalled. “I loved the energy of the city, the people. And it was this 360-degree detour for me. Being married in Dallas, I just didn’t have that exposure or explored that part of myself yet.”

Baron would call San Francisco home for the next 30 years. Not knowing a single person in the city when she arrived, she decided to lean on her architecture studies in France and took night classes in drafting and design. She said it was difficult starting out in a new field, working day jobs that eventually allowed her to build a career in interior design, teaching and in antiques buying. In the mid-1970s, she also served on an architectural design review committee in the Bay Area city of Larkspur.

“I try to put everything together, a sampling of things in my life, so that my personal growth is coming from this strenuous amount of effort. But no one else can do that but me, for myself,” she said.

Then, one day, in 1998, Baron was sitting in her San Francisco home, perusing a magazine, when she saw an ad about Connemara horses for sale. Not knowing much about the animals, her interest was piqued and she picked up the phone. The listing was for a Marin County number, but when the gal on the other end of the line said the horses were actually in Paso Robles, Baron decided to go for a visit.

“I kept hearing the name ‘Paso Robles’ over the years,” she said. “I once stopped at the little restaurant (near) the Black Oak Hotel while going to L.A. on business. And I know this sounds spooky, but a voice said to me as I walked out of that little café, ‘You’ll be back.’ ”

Shortly after the visit to the horse ranch, Baron, saying she felt she had taken the best from San Francisco, said goodbye to her vivacious city and moved to Paso Robles. Once again, she knew no one there.

A friend of a friend soon led Baron to buy a little ranch in eastern Templeton, accessible from a dirt road in the back hills near Creston. Unsure about being so rural, Baron was hesitant at first.

“But I pictured myself going up and down that little dirt road,” she said. And she was smitten. She soon settled in but felt the ache for connecting to the arts once again.

“I got kinda lonely out there in the boondocks and got a piano and called up a teacher and said, ‘Would you consider an adult student?’ ” she said. The pair decided Baron should go back to the violin, something Baron says she and her father did as “a flash in the pan” during her childhood.

“When I picked the violin back up, I felt trepidation,” she said. “I thought, ‘Was there any muscle memory to this? Am I holding it right? Why do I have to pick the thing up and go to a lesson all the time? Can’t I just watch it being played and that be enough?’”

But observing wasn’t enough. The need to play music became a part of her. And, looking back, Baron realized it had always been there.

“When I wasn’t practicing piano, my father said, ‘At some time in your life, you will regret this,’ ” she recalled. “So those things influenced me, but obviously were suppressed. And now, it’s not like I have to master it (the music), but I do have to experience it.”

Symphony of the Vines

In 2010, Baron read that Symphony of the Vines, a new nonprofit chamber orchestra, had formed in the North County. The organization is dedicated to youth scholarships and bringing music to the public. Baron attended its concerts and felt connected to its musicians, knowing she would likely never play in a symphony herself.

“I got very involved in going. And when you’re enthusiastic about something, it all comes together,” she said. In July, Baron became president of the organization, feeling connected to the arts now more than ever. But her personal drive to explore hasn’t changed. Two weeks ago, she decided to take up cello lessons.

“I just wanted to experience what that felt like. Of it resting on my left leg and oh, how that bow is so different!” she said with delight. “Even if I don’t become a musician, I know about the music — and the expression of music — and that gives me satisfaction.”