A mother and child reunion, 71 years in the making 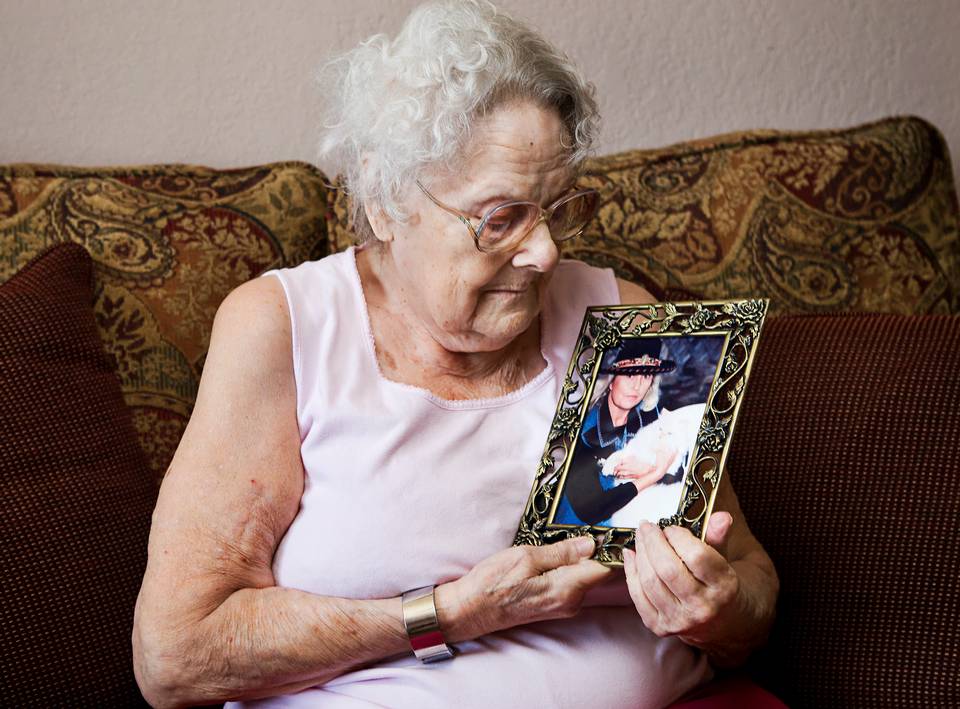 Brooke Mayo, 89, sat at a small kitchen table in her Paso Robles home on a recent afternoon as she carefully adjusted her eyeglasses and began telling a story of the daughter she gave up for adoption in the summer of 1942.

She reunited with that daughter for the first time this summer — a remarkable 71 years later.

“In 1941, near Christmas, a young girl got pregnant,” she began in a somber tone. “She was raped, and she got pregnant.”

That young girl was Mayo, back when she was just 17 years old and walking to her car after a dinner party in the Hollywood Hills. She never knew her attacker.

Nine months later, she gave birth to a little girl she named Delphine, a character in a film she liked, the 1940 motion picture, “Kitty Foyle.”

“They aren’t supposed to let you see the child, but I had a night nurse who was the nicest lady.

“And she let me hold the baby, who had the cutest, round rosy cheeks. I remembered those always,” Mayo said, a rare falter in her voice. “In those days, having a baby as a single person … I just decided (adoption) was better for her.”

With support from her mother, she made the adoption arrangements at the same hospital in Glendale where she had the baby.

“Then war broke out, and I signed up to go overseas,” she said.

When Mayo arrived back home in 1945, she called the hospital to ask about her little girl.

“I thought about her an awful lot,” Mayo said. “I just wanted to let her know she wasn’t adopted because I didn’t care about her, because I did.”

But the woman on the phone told her that her daughter had died, she said. Mayo, heartbroken, trusted that this was true.

In reality, the baby wasn’t dead. The girl, renamed Patricia, was living with her adopted parents and a brother in the neighboring city of Burbank.

“We think they told her she died so she’d stop looking,” said Robin Barris, Mayo’s friend and caregiver.

From that day until Patricia was nearly 8 years old, mother and daughter lived mere minutes from each other — neither one ever knowing the other existed.

In fact, Patricia never knew she was adopted until 20 years ago.

“I still lived on Fairview Street in Burbank when they told her I was dead — three or four miles away,” Patricia said Thursday by phone from her Kansas home. “I’m just glad I was able to find her. That’s the bright side of it. It’s been a long deal, and I’ve been upset over what my mom and dad have done. But that’s OK now because I found her.”

After the adoption, Mayo, one of two sisters in a family of no boys, served in World War II as a civilian administrator for the U.S. Army.

Her father died in 1938, and he “would have wanted someone from the family to serve their country,” she said. She worked in London and arranged housing placements for other American civilians there, such as the wives of generals.

Back home, after being told her baby had died, Mayo went on to become a showgirl and dancer, taking cues from her mother, who was a costume designer.

She briefly worked in the motion picture industry but said she didn’t care for the early mornings.

Instead, she traveled as a dancer, performing in stage shows across the country. She danced with movie star Gene Kelly and gave a ride to entertainer Sammy Davis Jr., stranded at a bus stop before he was famous, after recognizing him from a performance the night before.

She pursued college during the day, studying at places such as New York University, Northwestern University and Cal State Northridge in math, psychology and Egyptian studies — the latter inspired by something she saw in a newspaper one day.

“My father always said, ‘Honey, you can do anything you put your mind  to,’ ” Mayo recalled.

Later, she married, had two other daughters and worked as a collections manager. In Paso Robles, she’s known for her dogged fight against citywide water rate hikes in recent years.

She lived life. But her first daughter always lingered in her thoughts.

Since she learned her baby had supposedly died, Mayo lit a candle for her each year.

“There’s not a year I never thought of her,” she said.

Patricia, whose last name is being withheld because of Mayo’s concern for her daughter’s privacy, was almost 8 years old when her family moved from Burbank to Wichita, Kan., where her father took a new job.

Patricia’s father died when she was 14, and her mother continued to live in Kansas. She said her parents were good to her. Her father, a soft-spoken man, would do anything for his family, Patricia said. And she appreciated her mother’s sense of humor.

Patricia married, raised three boys and led a life rooted in helping others. When her kids were in school, she did corporate work for American Airlines and Pizza Hut.

It wasn’t until 1993, years after her parents died, that she learned she was adopted. She was 51 years old.

“To start with, I was shocked and then really angry,” Patricia said, adding that she’s had lifelong kidney issues that always baffled her because such problems didn’t run in the family.

She might never have known the truth had her brother not misplaced his birth certificate and called her up one day looking for a copy. They called Los Angeles County to get a duplicate, and that’s when the clerk on the other line said they weren’t in the system.

“I said that’s impossible. And he (the clerk) said, ‘Well, then you must be adopted,’ ” Patricia recalled.

It was that moment on the phone with a stranger that prompted what became her 20-year quest to track pieces of the adoption puzzle, while her brother continues his search today.

“I knew nothing because everything my folks told me was a lie,” she recalled.

Research eventually led her to discover that she and her brother, Ron Rodney, had been adopted from different families in closed adoptions that were likely illegal at the time. The circumstances also meant that getting a judge to release their adoption paperwork would be difficult.

Patricia started by phoning a family friend who lived next door to her parents in Burbank.

“I asked her, ‘What do you know about Ron and I being adopted?’ And she said she didn’t know.”

Frustrated, Patricia said goodbye and pondered her next move. But that same day, Patricia said the woman called her back and, emotionally torn, unloaded the bombshell: “I promised your mom I wouldn’t tell.”

News of the long-kept secret rattled Patricia to the core.

“I don’t know why (they hid it),” Patricia said of her parents’ decisions. “I just wish (they) would have told us the truth.”

After many attempts and few breakthroughs over the years, Patricia finally learned the name of her birth mother this summer.

Her search was lengthy; leading Patricia to two states and many roadblocks as she resolved to find her birth mother without hiring a private investigator.

The long and frustrating search came to an end when Courtney Storck, a friend’s daughter with a keen interest in genealogy, found out about Patricia’s search and offered to help last year.

Through her efforts and Patricia’s determination, they received the long-sought documents in early July.

And, when Storck looked up Mayo’s Paso Robles address, she told Patricia that it looked like Mayo was still alive.

“I was floored,” Patricia said. “After all this looking, and then — bang — just right out of the blue, there she was.”

It was a typical Thursday in July when Barris, Mayo’s caregiver, was going through Mayo’s mail. A large cardboard envelope caught her eye, and she tore it open.

“I started reading it to myself and then said, ‘Hey, what do you think of this?’ ” Barris said as she re-enacted the bewildered look on her face that day.

The envelope contained a letter and several photocopies of adoption documents. The letter was from Storck, saying that she had done research and believed that Mayo was the biological mother of a dear friend.

And the daughter wanted to meet her.

Among the documents was another letter from Storck’s mother, Renae Storck, who volunteers with Patricia at the Red Cross. She described her friend, the type of life she’s led and a little about her personality.

“ ‘She has a sarcastic wit and doesn’t have a problem voicing her opinion,’ ” Mayo excitedly read aloud from the letter last week.  With a pause, she looked up and smiled broadly, adding: “And that’s me!”

The next morning, Barris and Mayo crafted an email to Patricia, saying Mayo would love to meet. Then they left for a doctor’s appointment, hoping to have a response by the time they returned home. But the inbox was empty.

Robin left for a bit and “she was not out of the house 10 minutes when the phone rang,” Mayo said.

Patricia asked Mayo if she was all right, and if she was sitting down.

“I wanted to email her (first) because you don’t call up someone who is (almost) 90 years old and say, ‘Hey, guess who I am?’ ” Patricia joked.

The pair talked for two hours.

Less than two weeks later, Patricia and her husband, Dick, were on their way to Paso Robles. They met Mayo in person July 22.

“I stood up and I just wanted to hold her. She looked so good to me,” Mayo said, remembering Patricia walking through the front door for the first time.

“When she came here, Brooke was grabbing her hands and kissing her,” Barris said of the touching scene. “It took all I had not to just fall apart.”

When Patricia first saw her birth mother, she said, “I looked at her and thought, ‘Holy cow. That looks like me.’ ”

The pair shared pictures of the past and chatted about their lives. They both said they instantly knew they were family.

Several people have brought up genetic testing to them, the women said, but they don’t care for the idea. For now, they’re enjoying learning more about each other.

The women plan to visit again this winter, and they talk at least twice a week by phone.

“I was in a daze,” Mayo said of the whirlwind meeting. “I’m still in a daze. I can’t believe this. The people I talk to say it’s like a book or a movie or something, it’s just so amazing.”