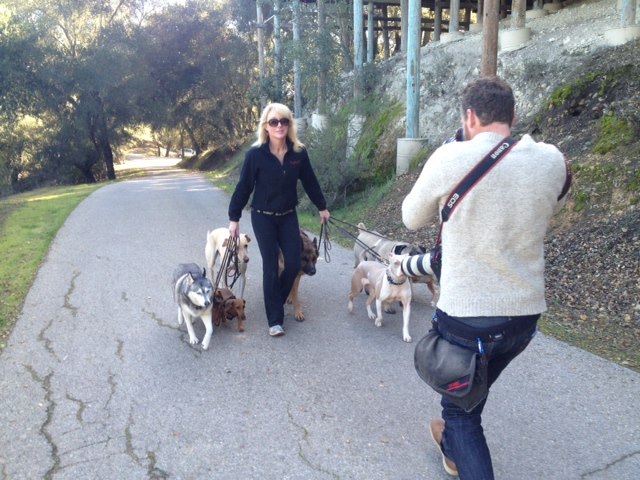 Second Chance at Love Humane Society founder Cheri Lucas beamed on a recent morning as she trekked through her expansive Templeton property, a large group of rescue pups padding faithfully behind her.

“All these guys have their own little story,” she said as she walked, motioning to her diverse entourage of four-legged friends.

Among them was Sandor, a sleek blond greyhound-lab mix with a slender snout and soulful eyes. Lucas flew him home from Spain two years ago after filming a television series there with celebrity dog trainer Cesar Millan.

The show was the Spanish version of “Leader of the Pack,” a reality-TV competition currently airing its second season, now in English, on National Geographic’s Nat Geo Wild channel.

Lucas endured 14-hour production days, with 110-degree temperatures, while working at the show’s Spain-based boot camp last summer. She helped teach families from the United Kingdom, Italy and the Netherlands how to work with dogs. The contestants then competed to prove they learned the skills to overcome each dog’s behavioral issues and give them a loving home. The show began airing Jan. 5 and runs for 12 episodes.

“The mission of the show is to not give up on shelter dogs. If you just have the right tools and techniques, they can succeed,” Lucas said.

Lucas, 58, founded her Templeton no-kill dog rescue in 1994. The all-volunteer nonprofit organization incurs about $120,000 a year in costs, largely in vet bills, and works off donations to adopt out 50 to 60 dogs a year while fixing dog behaviors on site.

Second Chance takes dogs that may not have met criteria for other shelters because of some problem issues, Lucas said. She has mentored under Millan for more than a decade to help dogs and their people better communicate to combat a variety of problems ranging from human and dog aggression, separation anxiety and other fear-based issues.

On “Leader of the Pack,” Lucas both appeared on film and worked behind-the-scenes prepping the dogs for going on the air.

She also helped to handpick the pups, pulling dogs from European shelters, and worked as a creative consultant.

“We looked for dogs with issues we could resolve or those who had a good back-story,” she said.

One such case was a little Jack Russell terrier mix named Mambo pulled from an Italian shelter. An Italian woman found him on the streets of Brazil during a vacation and brought him home, Lucas said, only to later dump him at the pound because he didn’t have good social skills with other dogs.

“So here you have this little Italian Brazilian dog,” she said with a smile.

There was also a Belgian Malinois named Janna — a shepherd type — that she found at a shelter outside  Amsterdam that suffered from a false pregnancy syndrome. The condition left the dog protective and nervous — even causing her body to produce milk.

“I did a ton of agility work with her,” Lucas said of her efforts to burn up the dog’s energy on other things to resolve the issue. The dog was also spayed and given holistic medication to dry her milk.

“Most of the dogs didn’t leave perfect but they left on their way to the long-term goal,” she said. “It’s basically, ‘Here’s what you need to do to be the kind of leader this dog needs.’ ”

Working with Millan has brought her to his popular “The Dog Whisperer” show and related ventures.

“It’s been a fascinating vehicle for getting the word out,” she said of working on television.

Lucas is also executive director of the Training Cesar’s Way workshop and hosts other training workshops on her property to raise funds for her cause.