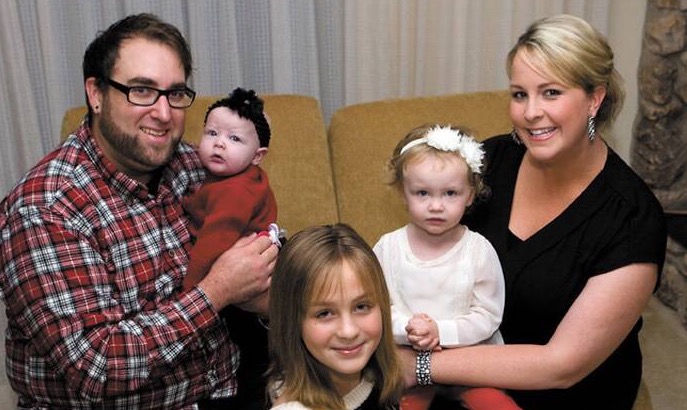 This Thanksgiving, the Skelton family of Arroyo Grande is weighing the profound worry of losing their 5-month-old daughter, Charlie, with the absolute gratitude of having her in their lives.

On July 1, Charlie was born with half a heart. Her condition, called hypoplastic left heart syndrome, is a rare congenital birth defect where the heart’s left side never formed, or formed improperly.

It’s estimated to occur in one in every 4,344 births, according to the Centers for Disease Control and Prevention, affecting 960 babies annually in the United States. There is no known cause.

Through all their worry, the Skeltons have worked to focus on the positive, creating the Hearts for Charlie Facebook page and participating in the American Heart Association’s Heart Walk to raise awareness for congenital heart defects.

From developing a pay-it-forward campaign to encourage followers to do simple acts of kindness for others in Charlie’s name to filming a documentary, the family says the wide-reaching support has meant everything.

“We just want to fill the world with love before Charlie’s surgery,” Charlie’s mother, Joslynn Skelton, wrote one day on the social media page. “Thank you for loving our girl!!”

The Facebook page started out as a way to keep friends and family informed of Charlie’s progress, but quickly opened the family up to what they say has been a whole new community of families — some on the Central Coast, some as far away as Australia, Belgium and South Africa — and everyday strangers showing their support by commenting, sending prayers and lighting candles worldwide. Thousands of people now follow Charlie’s story, from dozens of countries.

“Through the sadness and grief, there’s this beauty in it,” Joslynn Skelton said. “We feel like if we can share our hearts with the whole world. And that’s where the name Hearts for Charlie came from.”

Charlie has already survived one of the three risky open-heart surgeries designed to help manage her condition. If everything goes well, she could live into her 20s or 30s, possibly longer, before her heart will likely tire out and require a heart transplant.

But, for today, with her oxygen levels weaker this week than doctors have hoped for, her second surgery was moved up from the first of the year to Monday.

“I have been able to pretend that she is fine for these past four months. She smiles and laughs and really has brought so much love to our family that it’s hard to believe how sick her heart really is,” Joslynn Skelton wrote about Charlie earlier this month to her Facebook following of about 12,000 people.

“I am sick to my stomach knowing this reality. … I’m so conflicted with the emotions of not wanting to let her go and being afraid to get closer to her because of the looming fear of losing her. … Please, Lord, let her grow up so she can know me.”

Last Friday, Joslynn and Andrew Skelton were settling down after a long day of work and caring for their three children: Makayla, 11; Sawyer, 22 months; and Charlie, 5 months. Joslynn works full time in The Tribune’s advertising department while her husband, Andrew, is a self-employed photographer and stays at home with the kids.

Between changing into comfy clothes and talking about their day, and Charlie smiling and cooing in fuzzy footed pajamas while blowing raspberries, the weekday seemed routine. But, the persistent “beep beep beep” of a pulse oximeter machine reverberating from a back room and a cardboard box of sterilized face masks stashed for guests at the front door signaled this family had an atypical daily grind.

The parents hurried everyone down the hall and into the kids’ room, turning on cartoons. Sawyer, her curls bouncing as she ran, stuck a pacifier in her mouth and stopped for a second to stare lovingly at baby Charlie.

“Sawyer just absolutely loves Charlie and always wants to be right next to her,” her mother said. “She talks to her, and it’s almost like they have their own language. I get nervous that if something happens to Charlie, would Sawyer really remember her? That just terrifies me.”

Makayla, whose parents say that she, too, is smitten with her sisters, dutifully handed supplies to her parents. Her way of coping has been to help in any way she can. She recently raised $2,800 for the Heart Walk, money that will go toward research for congenital heart defects in children. As everyone piled atop a queen-size bed and wrangled with cords and chatted, they fastened a Velcro strap to Charlie’s little foot for a routine oxygen check as they do three times a day.

Through the mundane, there was laughter, and there were cuddles. Charlie let out a happy squeal.

“Her personality has come out,” Andrew Skelton said of his youngest daughter, pride in his voice. “She’s laughing and smiling. And she talks all the time. It’s not words, obviously, but she’s making her little baby words and noises. … She engages. She’s got such a personality. I’m totally attached to her and love her so much.”

At the time, the family’s Christmas tree wasn’t up yet. Moving up Charlie’s surgery from the first of the year has been hard on everyone, the family says.

“All I can think is, I’m eager to get the surgery over with because I want her to do well and I want to get back to normal and enjoy the holidays with our family. And, be able to hold her and know she’s not struggling to breathe and her stats aren’t getting worse,” her father said. “But at the same time, I’m scared to death that … part of me feels like, ‘What if we’re counting down the last two weeks that we have her?’ ”

Her mother feels the same, opting to hold off on buying Charlie any Christmas gifts.

“If something happens, I don’t want to have to look at them. Or, donate them to someone else,” Joslynn Skelton said, her grief bubbling up into a brief fit of tears before finding her resolve. “I just want to get her through this and then spoil her.”

In a typical heart, the right ventricle oxygenates the blood and pumps it to the left ventricle. The left side, the stronger muscle of the two, then pumps that oxygen-rich blood to the rest of the body.

Charlie’s heart, like other babies with her condition, doesn’t have that second step.

Through surgeries, doctors are redesigning Charlie’s existing heart anatomy to direct the right ventricle to both oxygenate and pump the blood to her body.

“Her whole body has been learning to do everything on a single ventricle,” her mother said. “So not only is her right side doing what it’s not designed to, it’s also has to work in overdrive.”

As a result, Charlie has less oxygen circulating through her body. Her fingers, toes and lips are tinged with blue, she has a hard time digesting and, sometimes, her breathing is labored.

Children with her condition need three open-heart surgeries as they grow: The first a few days after birth, the second between 4 and 6 months old, and the third between 2 and 4 years old.

Each surgery has a high degree of risk, the Skeltons said, but since each baby’s case is different, doctors are reluctant to give them an average mortality rate for the surgeries.

“It’s a coin toss,” Joslynn Skelton said. “Any number of things can go wrong.”
But, doctors told them that with each surgery the mortality rate decreases since the babies are older and stronger than the last.

And, in general, her mother says doctors tell her that 70 percent of newborns born with the condition make it to adulthood.

As a child, Charlie can expect continued struggles with breathing and other complications. There’s a 75 percent chance she’ll have some sort of learning disability, such as dyslexia, because of low oxygen to her developing brain. Participating in youth sports can be a challenge, but Charlie’s parents say they will let her do anything and take it day by day.

“At some point her heart will wake up and realize, ‘Hey, I’m not designed to do this,’ ” her mother said. Even now, Charlie’s oxygen levels are a concern. If her numbers get too low, she risks having a stroke.

Such was the case Tuesday when Charlie and her mom traveled to Children’s Hospital Los Angeles for routine tests to get her ready for surgery, when her levels dropped. She was admitted early, given medication and is now set to have her surgery on Monday.

“I’m terrified of losing her,” her father said once he was alone in the room back home. “We’ve become so attached to her. And, I mean, any parent should be attached to their children, but it’s like when you know that, beyond normal accidents or things that could happen to your children … it’s so real for us. That, we don’t know if we have another week with her or another month. …

“(We) just know and trust that she’s strong and a fighter and just hope that we have many, many more years with her.”