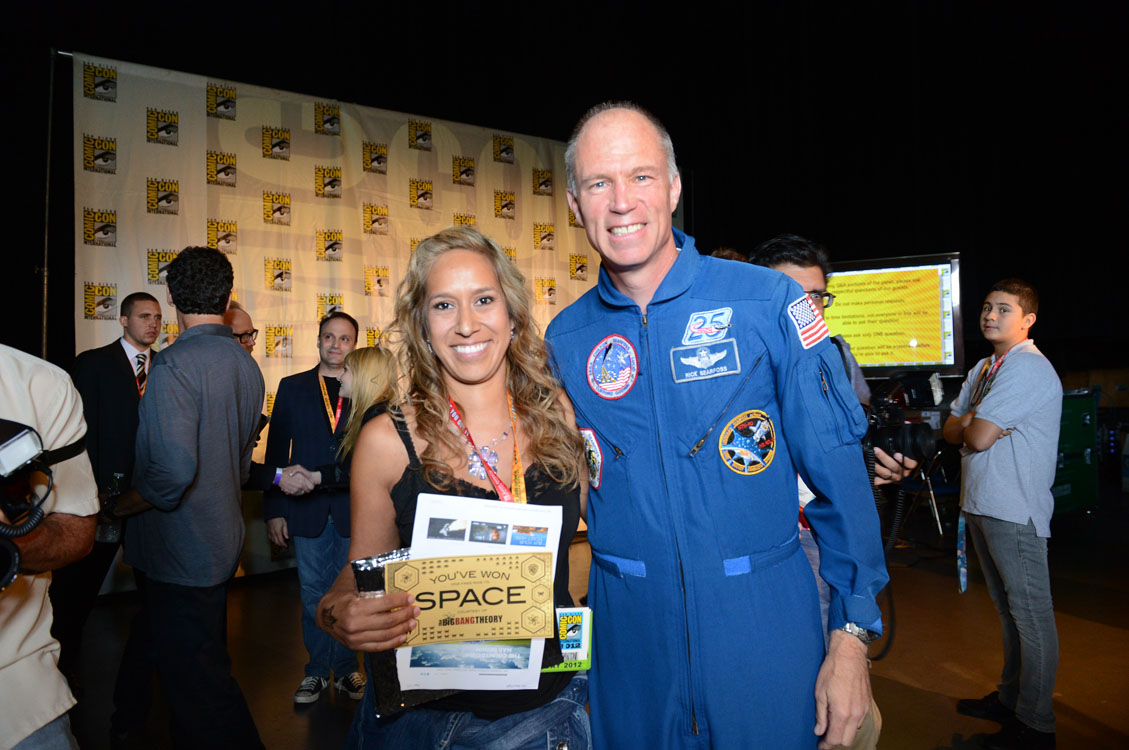 When Paso Robles resident Mercedes Becerra learned last month that she had just won a trip to outer space, she didn’t believe it. “I’m just so wowed,” the 35-year-old stay-at-home mom told The Tribune recently. “I get to go to space and see the view and tell the kids that I got to see this beautiful creation … I’ll definitely be appreciative of that beautiful scene.”

Becerra scored the golden ticket, which normally retails for $95,000, while attending a July 13 panel discussion featuring the cast of the popular CBS sitcom “The Big Bang Theory’’ at Comic-Con International in San Diego, one of the largest pop culture conventions in the United States. Warner Bros. Television awarded the flight to a fan to promote its hit show.

She’ll likely take her flight sometime in 2013 or 2014 aboard the Lynx, a piloted, two-seat, rocket-powered space plane being built by XCOR Aerospace of Mojave.

It should only take about three minutes to leave Earth but up to 30 minutes to return, Becerra said. The flight will center on the Pacific Coast and last about 45 minutes.

But first she must undergo five days of training, including being fitted with a pressurized space suit.

Only 534 people have ever been in space, company officials said.

The Lynx currently has about 200 ticket holders for space tourism, all ready to go up after the plane’s first test flights, slated for late this year or early next year, company officials said.

In this past season finale of “The Big Bang Theory,” Caltech engineer Howard Wolowitz — played by series stalwart Simon Helberg — was launched into space aboard a Russian Soyuz space capsule, according to the network.

To tie in the finale for fans, Helberg was asked whether he would want to visit space one day. That’s when an XCOR representative made a surprise appearance at Comic-Con and offered a trip outside the Earth’s atmosphere.

Series co-creator and Executive Producer Chuck Lorre suggested it be given to one of the show’s fans in attendance, according to Warner Bros. Becerra, a mother of three and a huge fan of the show, was one of dozens of admirers in the audience.

Little did she know that when she signed up to ask a question of the cast, she was also one of about 10 people chosen to compete for the space flight.

When she and the others were ushered onto the stage and given envelopes, Becerra said she wasn’t even thinking about outer space — rather, she was just hoping to get closer to her favorite stars.

“I thought, ‘I get to get a picture closer to the (cast) — maybe a handshake or something. Yay!’ ” she recalled.

The real shock came when everyone opened their shiny silver envelopes.

“I looked down and saw a golden ticket and looked to my right and said, ‘Wait, everyone has this, right?’ And they didn’t, so I shook it in the air!” Becerra said with a laugh.

Ever since, Becerra has been the center of media attention, taking part in a whirlwind of photographs and interviews with TV Guide, CBS and CNN, among others.

After she won, Becerra was ushered into VIP areas and received hugs from the cast.

“Big Bang Theory” actress Melissa Rauch asked Becerra how she was doing and told her that she needed to eat space ice cream.

Her star-struck moments didn’t end there. As she left a VIP area, “The Soup” and “Community” funnyman Joel McHale struck up a conversation. “He was like, ‘Hey, Mercedes. Nice necklace.’ And I was, ‘Oh my god, Joel McHale knows my name!” Becerra recalled.

The Paso Robles resident — who hadn’t even been on a plane until two years ago — and her 16-year-old son, Johnnie Becerra, received a lot of attention after that day.

“On the way home, we were looking at each other like, ‘Can you believe what just happened?’ ” she said. “It was exciting and continues to be exciting. I’m just so thankful.”