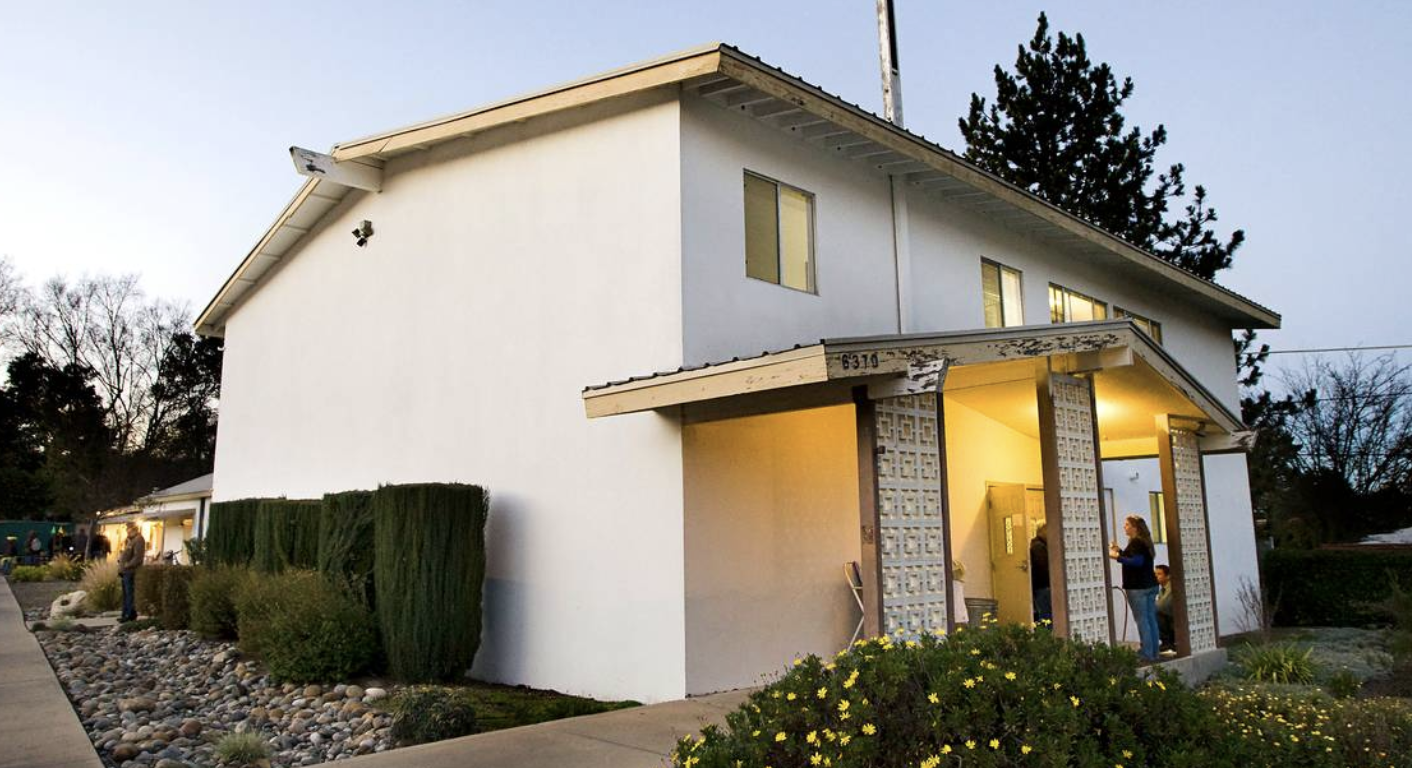 A puff of yarn bobbed atop 3-year-old Tylar Johnson’s knitted winter cap as she weaved through a cluster of people sorting through coats spilling from an oversized plastic bag. ECHO or the El Camino Homeless Organization, the North County’s only homeless shelter is in negotiations to buy the church it operates from.

The night air was uncomfortably cold, and the toddler and her mom, 39-year-old Leann Johnson, were among dozens of families and individuals who came for a hot meal and soft bed last week at the

“I’m working on getting day care for my daughter and work and housing. I made friends

Johnson, who’s stayed at the shelter since November.

The free service is one that countless people who have lost jobs, escaped abuse or simply fallen on hard times have come to count on for more than a decade.

While the 31-bed shelter has been a North County staple since 2001, it’s recently taken steps to expand and formalize its operation.

Its plan: Buy the Atascadero First Baptist Church building it has called home for the past seven years and get the permits to renovate it and expand to 50 beds.

The shelter has moved away from a come-and-go safe harbor model to a formal system that sets overnight stay limits to 90 days, focuses on transitioning people out of homelessness by assigning every client to a caseworker and establishing long-term partnerships with local resource agencies for services such as counseling, jobs and recovery.

“We’re trying to infuse the whole organization with a sense of urgency,” said Bill Watt, who was hired as ECHO’s first executive director this year. Before he arrived, the organization had no paid management and only two part-time paid employees.

The nonprofit, with hundreds of volunteers, provides 60 to 70 hot meals each evening and warm beds for about 35 people each night. Sometimes toddlers double up in beds.

ECHO will pay for the renovation from fundraising efforts through the years.

The organization is in negotiations with the church; Watt anticipates paying somewhere in the low $700,000s. ECHO operates on a $298,000 annual budget — 60 percent private donations and 40 percent federal housing aid — and has $440,000 in annual reserves, Watt said.

That’s enough seed money for a down payment and to finance renovations once the sale goes through. But such large investments mean fundraising is critical to ongoing operations.

The group hopes to kick off about $200,000 in renovations when escrow closes, with no interruption of services.

The move is a natural progression, according to Mike and Charlotte Byrne, who were part of the original eight Loaves & Fishes volunteers who founded ECHO.

“We’ve always been building to this point and looking past it,” Mike Byrne said.

Economy leaves many without anything

Atascadero, San Luis Obispo and the county’s transient population. Most are individuals but many are parents with children.

Each morning, clients eat breakfast, pack lunches and leave for the day. They can return for dinner starting at 4:30 p.m. and stay overnight if there’s room. Not everyone who comes for a meal sleeps there because of individual needs and space limitations — and those who do must take an alcohol breath-test to get a bed.

Bus passes, clothing and laundry vouchers and a postal address to receive mail are also among the services offered.

Sometimes people who live nearby walk over at dinnertime because they have housing but can’t afford to feed their children, said Templeton volunteer Jean-ette Bush. She said the crumbling economy has left many people with nothing.

Although ECHO is the North County’s only shelter, it’s one of many public assistance groups north of the Cuesta Grade.

About four years ago, the North County Homeless Services Coalition was created by various organizations, medical professionals and schools to discuss how to work together better — and to ensure that those who need help don’t slip into the cracks.

But the North County still lacks a single go-to spot for all the services designed to help those in dire straits, such as the comprehensive Homeless Services Center that the Community Action Partnership of San Luis Obispo County is trying to establish in San Luis Obispo.

“I would say that North County is in the middle of developing its approach. We’re probably a little bit more, in some ways, grassroots still,” said Dan Cano, Homeless Services Coalition chair.

ECHO began as a soup kitchen in a church on El Camino Real before it moved around to six churches that would take turns hosting the overnight shelter on a rotating basis. Service clubs and local groups brought meals to share with the hungry each evening.

“It started with spaghetti and frozen lasagnas,” volunteer and board past president Linda Doust said as she watched the packed dining room bustle with dinnertime activity last week.

Then groups started branching out and making signature meals, she continued, such as the ham and gravy entrées served that night.

In those founding years, volunteers would move clunky metal cots between sites so guests had soft beds off the floor. When the cots began to break down, volunteers found a seminary in the Midwest that had extra wooden beds it couldn’t use that just happened to be stored in San Francisco.

Volunteers coordinated to bring those beds to Atascadero.

Not long afterward, the First Baptist Church offered to become the group’s permanent home. ECHO has been there seven years rent-free minus the cost of utilities.

“There’s a little magic in this place,” Doust said.

Even today, “90 percent of what happens at ECHO is all volunteer,” Watt said. “It’s little old ladies and churches and synagogues and the local Rotary Club.”

‘The pain of staying the same’ outweighs fear

ECHO operates in two separate buildings at the church — a small dining room and a two-story living area with offices that act as bookends to an adjoining sanctuary that the church had used.

The sanctuary space is key to ECHO’s growth.

Watt plans to move the beds there and add portable walls to customize for groups as they arrive, such as veterans suffering from post-traumatic stress disorder.

“You never know who’s coming through the door,” he said.

Only good things could come from an expansion of ECHO’s services, program graduate John Richardson said.

“There’s no way to stress how much they helped me,” the 33-year-old added. “I wouldn’t be in the situation I’m in today if it wasn’t for ECHO.”

Richardson now has stable housing, work and — most important to him — he’s sober. He stayed at the shelter from August 2011 to February 2012 after battling alcohol and drug addiction since age 14 — ultimately living on the streets of Fresno, San Diego and most recently, Paso Robles. Richardson, a 6-foot construction worker, said he was desperately thin — 120 pounds — when he arrived at the shelter’s front door.

An old proverb from a friend stayed with him that day. He said it went something like: “When the pain of staying the same became greater than the fear of change, you’ll take the steps to move forward.”

“I can’t explain it, but it was just too painful to do what I was doing,” he added.

ECHO linked him up with food, people to talk to and a place to rest each night where guests must take alcohol and drug tests. Most importantly, though, it helped him overcome his crisis.

How you can help

To donate to the El Camino Homeless Organization, visit www.echoshelter.net or mail a check to ECHO, P.O. Box 2077, Atascadero, CA 93423.