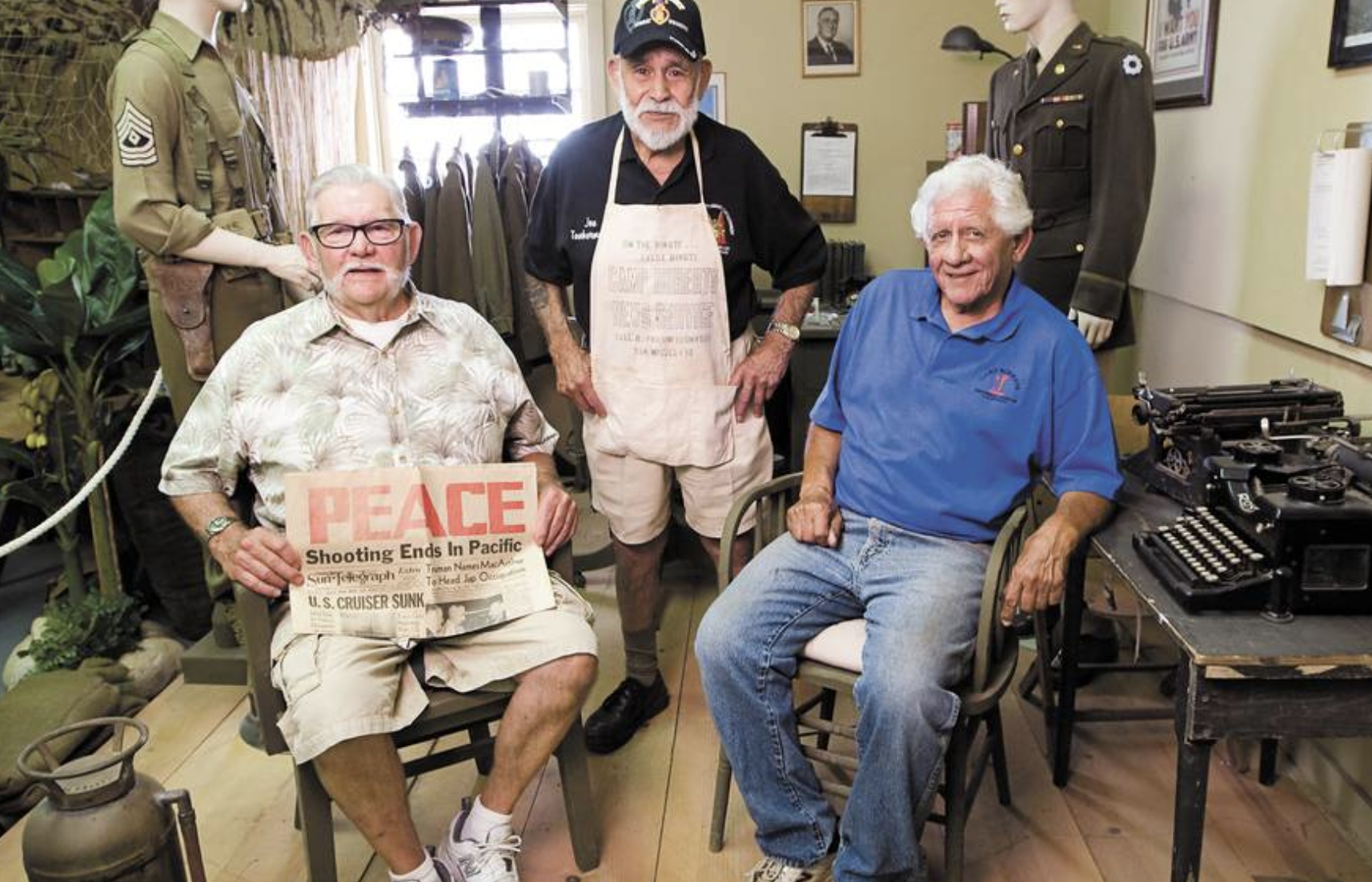 On the front of the apron, the phrase “On the minute … Every minute — Camp Roberts News Service” was displayed in faded gray block text.

Martinez, 82, of Atascadero, is one of a couple dozen men expected to attend the Camp Roberts News Boys Reunion on Oct. 12 at the California National Guard base in northern San Luis Obispo County.

The reunion will also include shoeshine boys who worked at the camp. The paper and shoeshine boys will all be featured in the Paso Robles Pioneer Day Parade on Saturday.

On Thursday, The Tribune interviewed Martinez along with two other locals who sold newspapers to the thousands of soldiers stationed at Camp Roberts during World War II and the Korean War.

They were Paso Robles residents Larry Moore, 83, and Don Avery, 77.

“It was a lot of fun,” Martinez said of those days, many years ago. “I was just a kid making money. It was great.”

When asked what he bought, Martinez, who had been fairly serious during his interview, stretched out a big grin.

“I’d buy candy and Cokes. Of course, I also gave a lot to my sisters,” he said.

Being a paperboy didn’t earn them a lot of money — the boys’ cut was typically about 2 cents for every 5-cent weekly newspaper or 15-cent Sunday edition.

But from their era was born a generation of enterprising youngsters who found other, crafty ways to earn some extra change. From shining shoes to hiking up the price of hard-to-come-by goods they snuck in from town, the young men pocketed good money in those early mornings before school.

Camp in its heyday

Servicemen from throughout the country came to train at the base, and the sleepy towns of San Miguel and Paso Robles brimmed with activity as families flocked there looking for work.

The Camp Roberts News Service hired distributors to supply newspapers to the base, and those vendors hired young paperboys to peddle the heavy stacks of papers on foot out of canvas bags.

“Having been in the Army far away from home myself, I know that a newspaper from back home — or even a local one — gives a soldier a precious chance to see what’s going on in the outside world,” said Gary McMaster, Camp Roberts Museum curator.

McMaster did his basic training at Fort Polk, La., but said the situation was the same at bases across the United States.

When Martinez was just 9 years old, he signed up for a job with newspaper distributer B. Frank Thompson from San Miguel. He worked as a paperboy from 1941 to 1943.

“Our newspapers out of San Miguel came by rail. We picked them up from the depot, put them in a paneled truck and then filled up our bags,” he said. “You carried as much as you could — just about 100.”

Martinez then hitchhiked over to the base and sold next-day copies of the Los Angeles Times and the San Francisco Chronicle.

Moore, the man Larry Moore Park in Paso Robles is named after, was a paperboy at Camp Roberts from 1942 to 1944. He was 10 years old when he started, working for a man named Gene Gibbs out of Paso Robles.

“We would load up in town early in the morning before school,” Moore said. “We’d come back with a whole whopping 16 cents in our pocket by 7:30 a.m. We all learned how to make a buck shining shoes.”

They found big money in applying Dubbin polish. It was a thick grease type of polish that soldiers would coat their field boots in to waterproof them.

“The soldiers didn’t like doing it. You had to smear it on and brush it in, and it took about an hour,” Moore said as he made a fierce scrubbing motion. “But that was about 50 cents for an hour’s work. That’s more than a day’s work selling papers.”

On really good days, the boys would scout out the quarantine barracks, where soldiers had to stay when they were sick or in trouble.

“Those guys couldn’t do anything, and they would pay dearly for a pint of ice cream or a Coke,” Moore said.

“You would go to the door and say, ‘You guys want anything?’ And the money started flowing.”

Moore said he’d take their orders and go over to the camp’s postal exchange,  where he would buy the goods for at least half the price of what the soldiers  ended up paying.

Moore was the eldest of six children in his family.

“Whatever I got, I’d take home to my mom,” he said, adding that she’d always give him some back.

“That was the way it was when Joe and I grew up. It was family.”

Martinez was the eldest boy of six siblings, born to Victor and Maria Martinez of San Miguel.

“My father was a track walker, walking from San Miguel to Paso Robles and back with a shovel and a wrench,” he said. “If the joints came loose, he’d tighten them up.”

Martinez said that until the age of 17, he lived with his family in a railroad boxcar given to his dad.

Avery was a paperboy at the base in 1950, during the Korean War, when he was 14 years old. He worked for one distributor for a short time before losing that job and moving to another outfit that sold The Fresno Bee.

“I couldn’t carry enough papers, so they fired me,” Avery said, laughing. “I didn’t know the other guys left papers in the mess halls and came back for them. I just tried to carry them all.”

His generation got crafty, too.

Avery recalled one particularly enterprising day that got him into trouble.

“I sold my sister’s phone number for $1,” he said with a chuckle. “I sold it 10 times in one day while shining shoes.”

Back at his Paso Robles home, his family shared a telephone line — called a party line in those days — with five other houses.

Avery is the eldest boy of six siblings.

He and his friends soon learned they could buy a box of 100 wide-style rubber bands for $1 at Eddie’s Mercantile in San Miguel and the soldiers would buy two rubber bands for a quarter to tie the ends of their pant legs under their boots.

“They needed to blouse their pants and weren’t allowed garters. We’d make some good cash and then go play pinball,” he said.

The base had a recreation hall with games and entertainment.

“Sometimes we’d stay out there until 9 p.m. and no one cared,” he added. “Then we’d step out into the street and hitchhike home.”

After the Korean War, paperboys at Camp Roberts dwindled as soldiers likely purchased their newspapers at the base’s postal exchange. Today, the camp sells the local papers, USA Today, Army Times and “all types of magazines and paperback books for the soldiers to read,” McMaster said. Today’s soldiers also read a lot of news on their smartphones.