Home / Community / History / How did this heart get in the downtown Paso Robles park?

How did this heart get in the downtown Paso Robles park?

How did this heart get in the downtown Paso Robles park? April 28, 2017 tstrickland
CommunityHistory 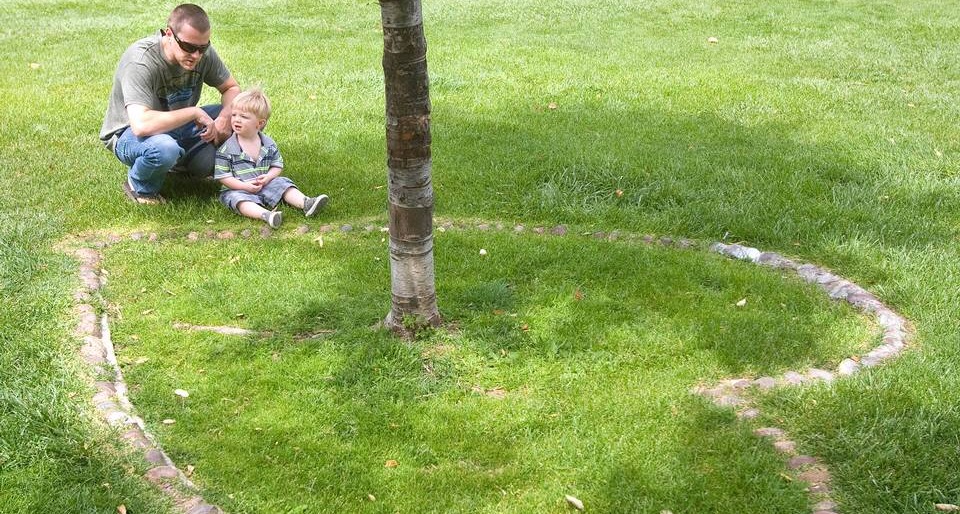 A mythical grave that inspired endless hours of childhood make-believe, a filled-in goldfish pond from the 1940s, and a quaint spot for lovebirds of years past to sit hand-in-hand.

The 100 or so stones placed in the shape of a heart around a tree in Paso Robles’ Downtown City Park brought many a tale last week after local dad Matt Browne posted a photo about it on Facebook following a play date with his son.

“I don’t think I’ve ever noticed the heart of rocks around this tree in the downtown Paso Robles park,” Browne wrote above the image of his cute towhead toddler, Sammy, standing inside the shape.

The post attracted many “likes” and comments. And yet, few seemed to know how the heart came to be there.

Within an hour of Browne posting his picture online, city tourism coordinator Shonna Howenstine was tagged in the comment thread, Browne asking her to sleuth out the tree’s back story.

She checked with the city’s public works department and sought help from a Facebook page that encourages locals to post memories about growing up in town.

Howenstine found out that the parks division of public works is familiar with the heart, but no one can recall why it’s there. It even predates a parks employee who has worked with the city for 23 years, she said.

As of Friday, the posts on Browne’s page and the locals’ page collectively had 66 responses — and no final answer. Here are some of the responses on Facebook:

“As kids we used to play a game that it was a grave and if you stood in it too long you would get sucked underground. But I have no idea what it is there for.”

“I think the concrete patch behind it used to hold a table.”

“When I was a kid playing in that park, I remember that heart. My sister and (I) played in it. I just kinda thought it was to make the tree look pretty. But yeah, it’s been there as long as I can remember, and I’m 25 this year. I don’t (ever) remember a table or anything near it. It just was there.”

“Back in the ’40s and ’50s, there were several goldfish ponds with rock-edged linings in the park. This may have been one of those fish ponds, which after being filled was planted with a tree.”

“It was hidden in the middle of a huge bush when I was a little girl … like a secret garden.” — SierraRose Przybyla

“Is the tree possibly a memorial to someone, and this was a way of signifying it? Now we are going to have to start an inquiry!!!” — Steve Baker

“They used to have this old shade tree and this bench there that was like a lovers bench. Where old people go to make out and look cute.”

Browne said the best part about finding the heart has been seeing what others had to say about it on Facebook.

“I think it mostly was curiosity — people saying they haven’t really noticed it and grew up here,” he said. “It’s just a fun little mystery at this point.”

The heart and tree are on the southwest end of the park, close to 11th and Spring streets, across from the Paso Robles City Library’s front doors.

Next to them are two rectangular slabs of concrete. Several people said a table or bench once stood there, and that there was a plaque on it that may have explained the story of the heart. However, except for the base slabs resting in the grass, those clues are now gone.

The stones appear aged, with a few missing. Many of them were laid in concrete first, while others are just nestled in the dirt.

The tree is significantly smaller than others nearby, and looks young, with some people estimating that it can’t be more than 10 to 15 years old. However, others say the heart likely predates the tree, as they remember seeing the shape 20 to 30 years ago.

Browne said he looks forward to hearing more about his find.
“The history of towns and people are interesting to me,” Browne said, “And to be able to piece that history together.”