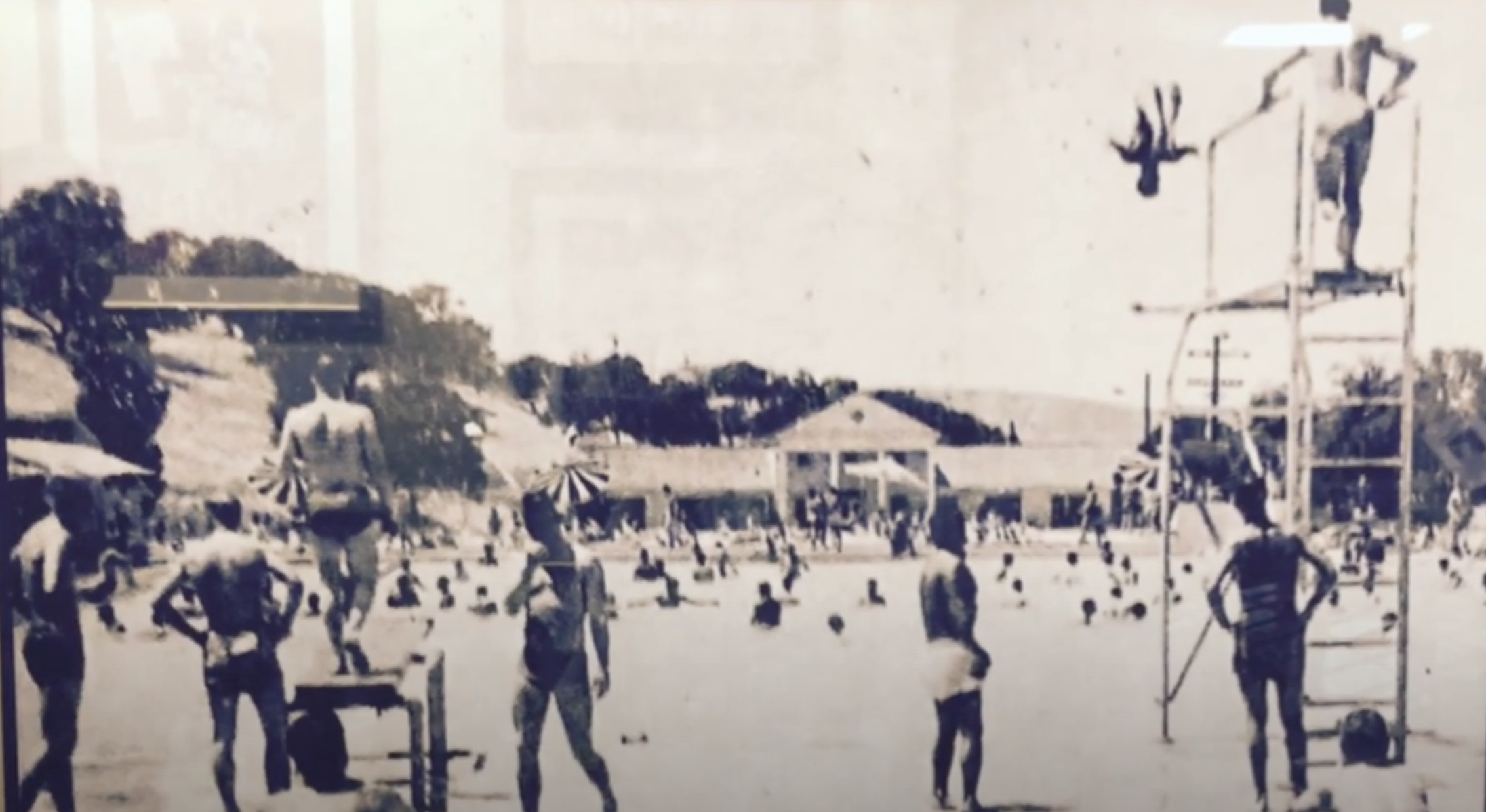 Paso Robles resident Don Avery remembers plunging into the cool waters of Camp Roberts’ Olympic-sized swimming pool 65 years ago — memories that bobbed to the surface in recent weeks as the base continues to demolish its aged World War II-era facilities. The swimming pool opened in 1945 and was last used in the 1990s, said Camp Roberts Historical Museum director and curator Gary McMaster. It sloped from the shallow side to 12 feet at its deepest end. “Mom was afraid we’d drown in it,” Avery said, teasingly.

It was the summer of 1950 when a 13-year-old Avery sunbathed by the pool while his father, the late Dutch Avery, took a dip with Don’s baby sister, Darlene. A black-and-white picture from Avery’s personal collection shows the family fun that day. Over the years, thousands of service members sunned on its pool deck, leapt off its diving boards and otherwise took respite there from the wilting North County heat during long summer training days.

Going forward, the pool will be filled and the site will likely become a staging area for helicopters and other heavy equipment for the museum to display, McMaster said. “There are no plans to build a new pool,” base spokeswoman Susanne Thomas said. “Camp Roberts … does not allocate for a recreational swimming pool or even a training/conditioning pool.” Demolition project The pool demo began late last year and recently picked up again after a short break. Its razing is part of a larger modernization at the camp — a training ground just north of San Miguel run by the California National Guard — and follows a multimillion-dollar demolition project that kicked off in 2012 in which hundreds of barracks, mess halls and administration offices that stood empty for decades were torn down. Today, most of those green-topped structures, once so visible off Highway 101 with their gaping windows and peeling white paint, are now gone.

The pool demo is part of a nearly $2 million work contract with MarCon Engineering Inc. of Santa Maria for the demolition of 104 buildings including barracks and warehouses, Thomas said. Relics of the past On a recent afternoon, Ret. Army Sgt. 1st Class McMaster looked over the debris and pointed at clues to what once was. Located across from the museum on the base’s west side, the footprint of the empty pool was surrounded by mounds of rubble behind a chain-link fence. To the west, the changing rooms were now piles of broken aqua- and red-tinged concrete. To the south, two diving boards were torn out amid a snarl of mangled metal. To the east, a former pump station was razed and gutted and is now a collection of concrete pits with shallow water surrounded by exposed plumbing and discarded iron valve hand-wheels strewn over the dirt.

The scene was a stark difference to the pool’s heyday, when the base housed as many as 40,000 servicemen and servicewomen during World War II in the 1940s and close to 25,000 during the Korean War in the 1950s. Camp Roberts was a U.S. Army base during the wars, until 1971 when it was turned over to the California National Guard, McMaster said. Last week, a nearly deflated water polo ball and lockers were found beneath some of the concrete. Earlier, the museum acquired several metal wire baskets that pool-goers used to stash their clothes while they changed into swim trunks. The baskets, some rusted and sporting locker numbers, along with a newspaper clipping and several photos of dozens of men at the pool, are now on display at the museum. One photo on display shows dozens of men enjoying the facility — one doing a backflip off the diving board while others lounged around on the pool deck in the sun. In 1945, the Camp Roberts Dispatch newspaper reported that bleachers were installed to host the 2,000 people expected opening day. The day’s program included “a colorful aquacade of 30 lovely swimming mermaids,” 16 of whom were from the Southern California Aquabelles group, who would perform “a number of colorful underwater and surface scenes,” according to the newspaper.

Pool memories Now 77 and a retired Army National Guard sergeant, Avery first visited the pool five years after that opening day. His dad helped build the camp in 1940, earning $50 a week, and then worked there for the next 31 years as a foreman. “We swam in it about three times,” Avery said of the pool. “It was not as nice as the river. The water in the pool was cold.” The Nacimiento River runs from Lake Nacimiento through Camp Roberts and into Monterey County. There was a diving board set up at one spot on the river, Avery said, and the water was about 20 degrees warmer than the pool because the Nacimiento Dam wasn’t built until the early 1960s.

Originally published here, but has a paywall: https://www.sanluisobispo.com/news/local/article39514797.html#storylink=cpy